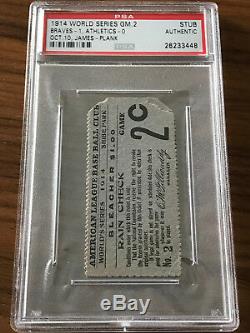 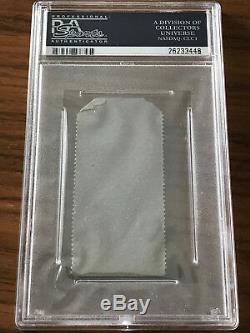 October 10, 1914 at Shibe Park. For your consideration is a scarce, beautifully-preserved ticket stub to Game 2 of the 1914 World Series at Shibe Park in Philadelphia.

Graded and authenticated by PSA, the hobby's leading third-party authentication service, this ticket achieved a PSA Authentic representing the highest grade for this game. At the time of this listing, there were only 2 total tickets to this game captured on PSA's population report. Tickets to any game of the 1914 World Series are extremely difficult to find. Please let me know if you have any questions and don't forget to check out my other listings. I'm a World Series ticket collector myself so I'm always looking for tickets to complete my sets. About the Game The "Miracle Braves" were in last place on July 4, then won the National League pennant by 10 12 games.

The Braves' relatively unknown starting trio of pitchers, with a combined career record of 285245, outperformed the Athletics vaunted rotation (929654) in all four games. Adding to their supposed disadvantages, the Braves arguably lacked a notable home-field advantage.

They had abandoned their 43-year-old home field South End Grounds in August 1914, choosing to rent from the Boston Red Sox at Fenway Park while awaiting construction of Braves Field (1915). Thus their home games in this Series were also at Fenway.