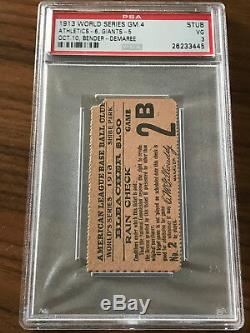 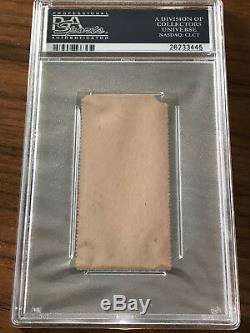 October 10, 1913 at Shibe Park. For your consideration is a rare, beautifully-preserved ticket stub to Game 4 of the 1913 World Series at the Shibe Park in Philadelphia. Graded and authenticated by PSA, the hobby's leading third-party authentication service, this ticket achieved a PSA 3 VG representing the highest grade for this game. At the time of this listing, there were only 5 total tickets to this game captured on PSA's population report. Please let me know if you have any questions and don't forget to check out my other listings.

I'm a World Series ticket collector myself so I'm always looking for tickets to complete my sets. About the Game The 1913 Fall Classic matched two historic rivalsthe Philadelphia Athletics and the New York Giantsthat exist today if not in their original cities. This tenth World Series of the modern era marked the third between these clubs, who met in a spirit of rancor that cannot be understood without a bit of backdrop. The Giants and A's were the class of their leagues. The As had won the World Series in 1910 and 1911, and the Giants were making their consecutive World Series appearance.

They had lost in 1912 in a heartbreaking extra-inning finale. Both clubs continued to rely upon aging mound starsMathewson, Bender, Plankbut the As had subtly become a different club. The Giants were a well balanced club, ranking first in pitching and second batting in the National League. The As, on the other hand, were tops in batting (as measured by OPS+) and next to last in pitching (ERA+) in the American League. By sabermetric accounting, these As were, in their 76 games at their new Shibe Park, the top hitting home club of all time.

Game 4 featured a matchup between, Chief Bender and Al Demaree, with the former proving victorious by pitching a complete game for his 2nd win of the series. The A's would win the game 6 to 5 and ultimately, the series 4-1 capturing their 3rd World Series title. Pictures below are for reference only and are not included with the ticket stub. The item "RARE 1913 World Series Game 4 A's vs.