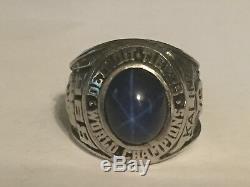 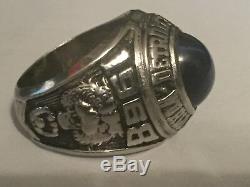 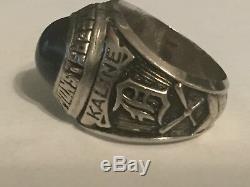 This is, what I believe to be a 1968 salesman sample Tigers 1968 World Series champions ring. Same ring given to players. I truly believe the pictures do not do the ring justice.

Based on the research I have done, I believe this to be a true 1 of a kind. Originally, I had thought this stone to not be original and to have been replaced over the years, as the stones on the actual rings given to players on that team are a square-shaped black stone with embedded diamond in the center. However, after further research and examination by 2 separate jewelers, they conclude that the stone in this ring is actually original to this ring and has never been replaced.

This stone is an oval shape. The setting for the ring shows absolutely no signs of alteration, which would be evident if this stone were to have been replaced, since quite a bit of alteration would have needed to have been made in order for the ring to house the current oval shaped stone if the original setting were for a square shaped stone, as was used in the final version of the ring.

Ring companies submit these sample rings to the teams prior to manufacture in order to get the teams final approval before they are made for the team. Often times, multiple different "samples" are produced for team inspection before a final design is approved. The conclusion after all research is that this was 1 of the true "sample" rings produced for the teams approval (hence the oval blue stone being original to this ring). However, the team did not approve this version with this stone and the more square shaped black stone was the ring that was finally approved for production.