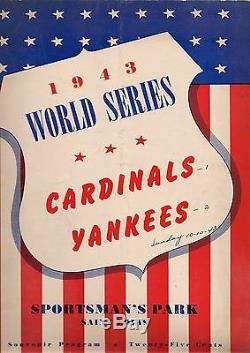 New York Yankees Game 4 World Series Program. Sportsman's Park, October 10. Final score - Yankees 2 - Cardinals 1. One inning scored in pencil. There's a 2" split at the base of the spine and a 1" split at the top as well as a small split on the center. The binding is still tight. There are very tiny chips on the right edges of several pages. The final score and date of the game are noted in ink on the front cover. Louis Cardinals World Series program - New York manager Joe McCarthy sent Marius Russo to the hill for game four of the'43 World Series, and the southpaw was up to the task, pitching a complete game and beating Cardinals ace Harry Brecheen, 2-1. The victory gave the Yankees a commanding 3-1 lead in the Series, and they closed things out the following afternoon to avenge their loss to the Redbirds in the'42 Series. The winning run came home on a Frank Crosetti sacrifice fly in the eighth inning.

The program has individual photos and bios of all of the players on both squads as well as photos and bios of McCarthy and S. There's also a great photo montage of highlights from the Cardinals''43 regular season. The Yankees starting lineup - Tuck Stainback, Crosetti, Billy Johnson, Charlie Keller, Joe Gordon, Bill Dickey, Nick Etten, Johnny Lindell and Russo.