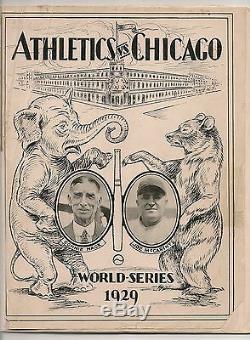 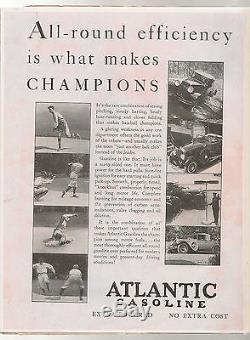 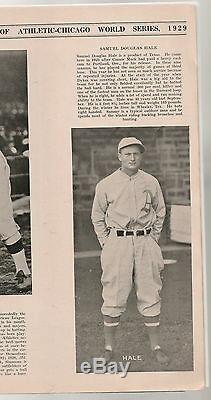 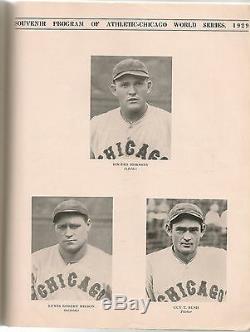 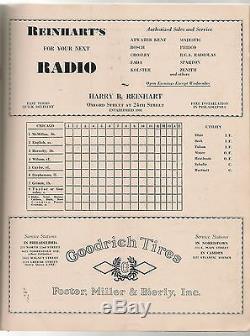 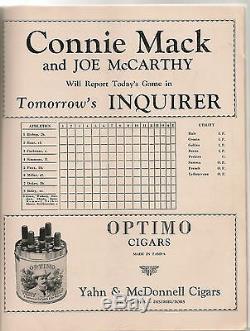 Shibe Park, October 11-12, 14. Final scores - Cubs 3 - A's 1 (Game 3). A's 10 - Cubs 8 (Game 4). A's 3 - Cubs 2 (Game 5). There have been repairs made to the front cover with binder tape running down the spine. Also the original back cover is missing, and there are two sheets of copy paper on the back that show the outside and inside of the cover the second scan shows the replacement. The interior pages are bound tightly and are all clean. The program has a crease down the center but lays flat. Several pages have chips and small tears on the edges. 1929 World Series program - This is a rare'29 World Series program from one of the three games played at Philadelphia's Shibe Park. The A's edition is the tougher one to find of the two programs. There are issues with the program, but it is in better condition than others I've seen.

The pages are unmarked and intact. The A's took the first two games of the Series at Wrigley Field and had visions of a sweep dancing in their heads when they went home to Shibe Park. The Cubs, however, took the first game in Philadelphia, 3-1, as Guy Bush outdueled George Earnshaw. The A's bounced back in the next two, though, to win the Series, four games to one. In game 4, Eddie Rommel outlasted Sheriff Blake in a 10-8 slugfest.

Al Simmons and Mule Haas homered for the Athletics, and Charlie Grimm went deep for Chicago. Haas homered again in game five to lead the way in a 3-2 A's win. Rube Walberg was credited with the win, and Pat Malone was on the short end. The program includes photos and bios of all of the Athletics and individual photos of the Cubs. There are also photos and bios of the two managers - Hall of Famers Connie Mack and Joe McCarthy.

The seller is "luvtoken" and is located in Wellesley, Massachusetts. This item can be shipped to United States, Canada.