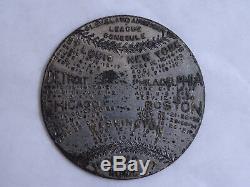 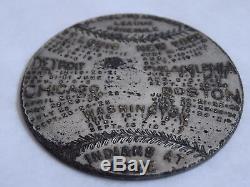 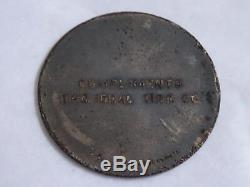 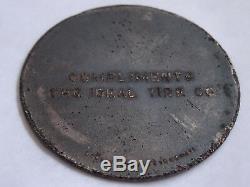 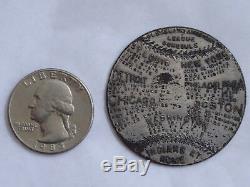 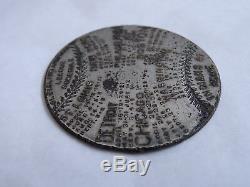 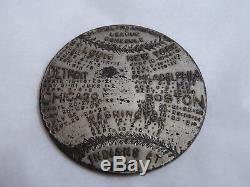 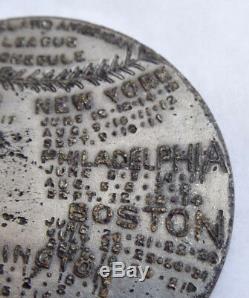 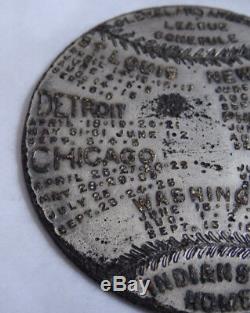 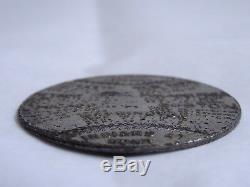 Rare memento from the 1920 World Series Champion Cleveland Indians. This is a Cleveland Indians pocket coin/token American League Home Schedule (compliments of the Ideal Tire Company). I have not attempted to clean the baseball schedule.

The 100 year anniversary is coming up, this may be the only opportunity to add this rare piece to your memorabilia collection. 1920 was a significant and memorable year for the Tribe, as they won their first ever World Series, beating the Brooklyn Robins 5 games to 2. The Indians played their home games at League Park.

They won the World Series in memory of their shortstop Ray Chapman, who tragically died after being hit by a pitch from Carl Mays earlier in the season. Bill Wambsganss turned the only unassisted triple play in World Series history. Elmer Smith hit the first grand slam in World Series history. Jim Bagby won 31 games and threw 30 complete games. Tris Speaker led the Indians by hitting. 388 with 50 doubles as a player/manager.

Around the league in 1920, it was Babe Ruth's first year with the Yankees. 376 batting average, 54 home runs and 137 runs batted in would generate an attendance of 1,289,422 fans in his first year and lead to the construction of Yankee Stadium.

Also the league was dealing with a major controversy amid rumors of a gambling fix. Eight members of the participating Chicago White Sox were all charged with conspiring to throw the Fall Classic against the Cincinnati Reds. After a lengthy investigation and highly publicized trial (lasting until 1921), the "Black Sox" were acquitted despite their own confessions. Give this rare piece of Cleveland Indians and Baseball history a great home! It's possible I could miss something, but be sure it's not intentional!

The seller is "t-shirt-adoption-services" and is located in Westlake, Ohio. This item can be shipped worldwide.